While our time on the water is postponed, we can keep the sailing spirit and education alive in our homes.   Dave Perry is offering three of his books –  Winning One Designs, Understanding the Racing Rules through 2020, and 100 Best Racing Rule Quizzes for $25 (plus S&H.)    Purchase here

May  questions with answers:

#6 – Boats S (on starboard tack) and P (on port tack), both close-hauled, are converging on a​         beat. P will safely cross S. However, when they are less than two lengths apart, the wind veers (shifts to the right) ten degrees. S luffs (changes her course) in response to the windshift such that P is unable to keep clear.

There is minor contact with no damage or injury, and both boats protest.  How would you decide this? 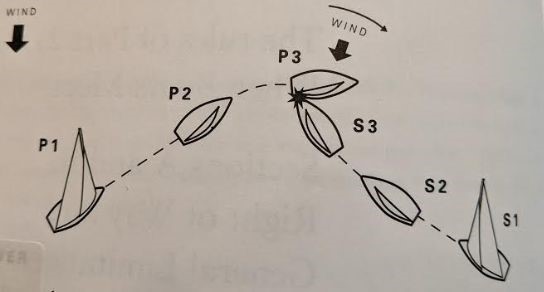 #33 – A port-tack boat (PA) and a starboard-tack boat (SB) are approaching the windward mark.​     PA tacks to round the mark, and passes head to wind within the zone. At that moment she is one length ahead and slightly to windward of SB, and moving more slowly than SB due to her tack. SB holds her course. As PA begins to bear away around the mark it becomes apparent that SB will hit PA’s leeward side, and that there will not be room for SB to sail between PA and the mark without hitting either. PA luffs away from the mark and SB passes between PA and the mark with no contact. PA protests SB. How would you decide this? 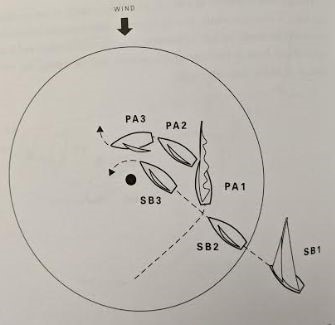 #37 – At an upwind finish, two close-hauled boats on opposite tacks (S and P) are converging at the left end mark of the finishing line. When about a length and a half from the mark, P completes a tack to leeward of S without fouling her. However, in order to pass the mark on the correct side, P luffs up to almost head to wind, thereby causing S to sail above close-hauled to avoid contact. S protests P.  How would you decide this? 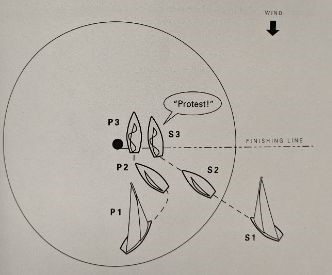 Q for failing to completely cross the finishing line.  How would you decide this?​

You are the scorer; which boat beats the other?

Here are the Answers to May Racing Rules Quizzes Good luck!!

#2 – A more experienced helmsman of a port-tack boat (P) hails “Starboard!” to a beginner who, although on starboard tack, not being sure of himself and worried about having his boat holed, tacks to port tack to avoid a collision. A third boat in the race protests the situation. You are on the protest committee; how would you decide this?

Answer #2:
Boat P is penalized under rule 10, On Opposite Tacks, and rule 2, Fair Sailing.
Rule 60.1, Right to Protest; Right to Request Redress or Rule 69 Action, permits a third boat to
protest an incident involving other boats. A boat that deliberately hails “Starboard” when she is
on port tack has not acted in compliance with recognized principles of sportsmanship and fair
play.” (See World Sailing Case 47.)

#7 –  Boats P (on port tack) and S (on starboard tack) are beating to windward. P tacks into a position just in front of S. When P reaches a close-hauled course, she is a few feet clear ahead of S. S, who has not needed to change course prior to that moment to avoid P, immediately luffs above a close-hauled course, avoids contact and protests.  How would you decide this? 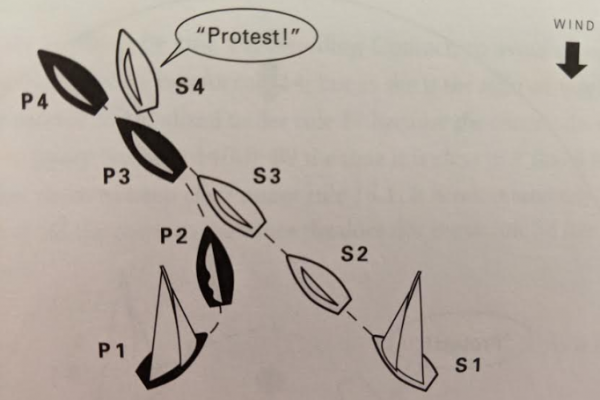 Answer # 7:
Protest dismissed; neither boat breaks a rule. While P is on port tack she is required to keep
clear of S under rule 10, On Opposite Tacks. While P is tacking, she is required to keep clear of
S from the moment she passes head to wind until she reaches a close-hauled course under rule
13, While Tacking. A boat “keeps clear” if the right-of-way boat can sail her course with no need
to take avoiding action (see the definition Keep Clear). S does not need to take any avoiding
action before P reaches a close-hauled course.
When P reaches a close-hauled course, rule 13 ceases to apply and P is the right-of-way boat
under rule 12, On the Same Tack, Not Overlapped. Because she acquired the right of way by
her actions, P is required to give S room to keep clear of her under rule 15, Acquiring Right of
Way. S is able to avoid P in a seamanlike way; therefore P complies with rule 15.

#8 – Boat S is rounding the windward mark on starboard tack onto a run. As she is rounding the mark, Boat P is approaching the mark on port tack. Boat S bears away around the mark, and as her transom leaves the mark astern, her boom touches the port shroud of P. There is no damage or injury. Both boats protest. How would you decide this? 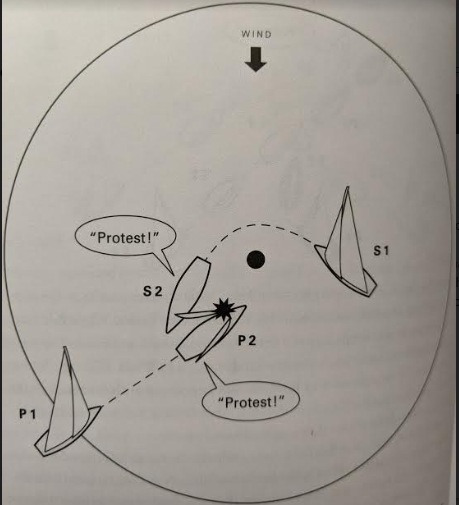 Answer #8:
Boat S is penalized. Boat S is “leaving” the mark and Boat P is “approaching” the mark;
therefore rule 18, Mark-Room, does not apply between them (see rule 18.1(c)). S is the
right-of-way boat under rule 10, On Opposite Tacks. But as she is changing course, she is
required to give P room to keep clear under rule 16.1, Changing Course, which she fails to do.
As rule 18 does not apply, S is not entitled to mark-room. Therefore, P does not need to
anticipate that S will bear away around the mark, and S cannot be exonerated for breaking rule
16.1 under rule 21, Exoneration.
Both boats are required by rule 14, Avoiding Contact, to avoid contact if reasonably possible. S
clearly breaks rule 14; but she is the right-of-way boat at the time, she cannot be penalized
under rule 14 because the contact does not cause damage or injury (see rule 14(b)). By the
time it is clear to P that S is not going to give her room to keep clear under rule 16.1, it is not
reasonably possible for her to avoid the contact; therefore she does not break rule 14 (see rule
14(a)).

#12 – Boats A and B are approaching the starting line to start. B is a few feet clear astern of A and yelling “Up! Up! Up!” A holds her course. B then becomes overlapped to leeward of A and A immediately luffs (heads up) approximately 15 degrees and there is contact between the starboard bow of B and the port corner of A’s transom. There is no damage or injury. Both boats protest. How would you decide this? 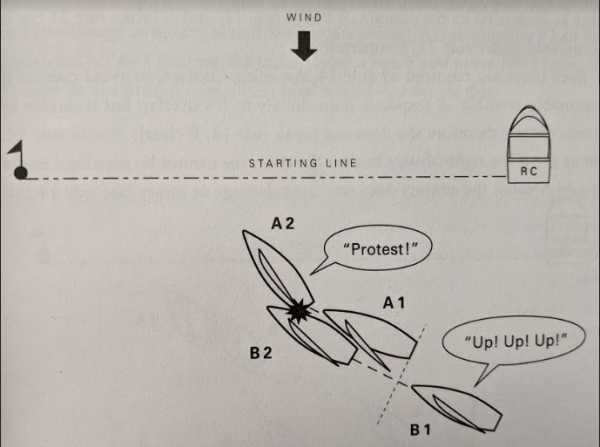 Answer #12:
B is penalized under rule 15, Acquiring Right of Way. Before the boats were overlapped, B was
required to keep clear under rule 12, On the Same Tack, Not Overlapped; and despite B’s hails,
A, as the right-of-way boat, was under no obligation to take any action relative to B. When B
became overlapped with A, she instantly became the right-of-way boat under rule 11, On the
Same Tack, Overlapped; however she was also initially required to give A room to keep clear
under rule 15. A immediately responded to her obligation to keep clear of B under rule 11, but
did not have the room (space) she needed to keep clear as evidenced by the contact. B broke
rule 15; and A broke rule 11 but is exonerated under rule 21, Exoneration.
Both boats are required by rule 14, Avoiding Contact, to avoid contact if reasonably possible. A
responds immediately to B’s overlap but is unable to avoid contact; therefore she does not
break rule 14. B clearly breaks rule 14; but as she is the right-of-way boat at the time, she
cannot be penalized under rule 14 because the contact does not cause damage or injury (see
rule 14(b)).

#31 – Boat S (on starboard tack) is approaching the leeward mark to be rounded to starboard. Boat P (on port tack) is similarly approaching the leeward mark on a collision course with S. When three lengths from the mark, P hails, “Mark room!” to S. S remains silent. When right at the mark, P begins to gybe inside of S and S is forced to bear away to avoid hitting P. S protests P. How would you decide this? 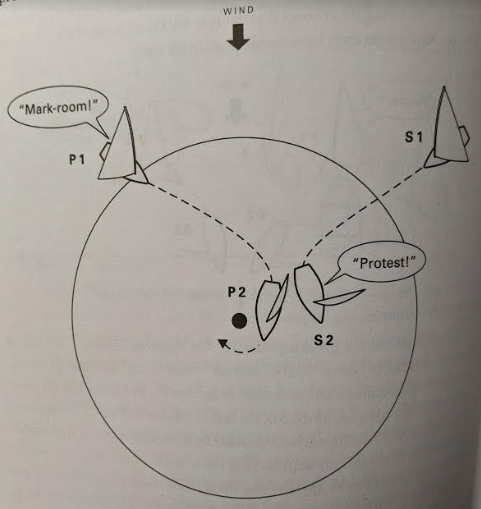 Answer #31:
Boat S’s protest is disallowed; neither boat is penalized. Rule 18.2(b), Giving Mark-Room,
begins to apply when P enters the zone (is within three lengths of the mark; see the definition
Zone). Though on opposite tacks, S and Pare are considered “overlapped” because rule 18,
Mark-Room, applies to them (see the definition Clear Astern and Clear Ahead; Overlap). S, as
the outside boat, is required to give P (the inside boat) mark-room, which includes space to
gybe when gybing is necessary to sail the course (see the definition Mark-Room). S complies
with rule 18.2(b) and P does not take more room than she is entitled to. Though P breaks rule
10, On Opposite Tacks, she is exonerated under rule 21, Exoneration, because she is sailing
within the mark-room to which she is entitled.